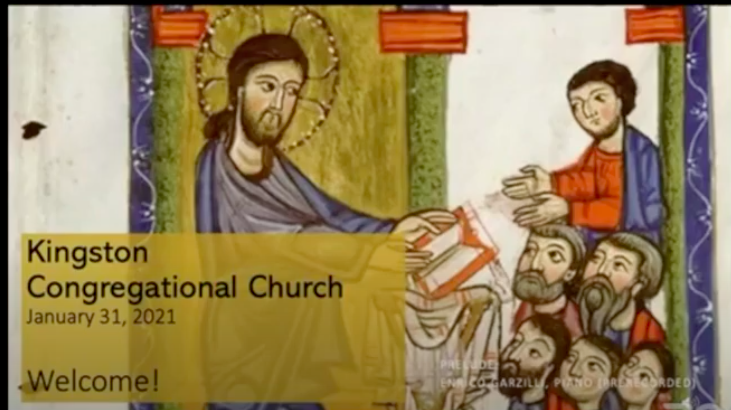 A New Kind of Authority

I have seen or heard of church services that were interrupted for all sorts
of reasons. When I was a child growing up in the small town where my father
was a local pastor―at a time when there were no leash laws―that detail
becomes pertinent in a second―we lived within walking distance from the
church. One Sunday, being a fine morning weather-wise, the church doors had
been left open during worship. About half-way through the service one of our
family dogs, Buffer, came prancing happily up the aisle toward the front of the
sanctuary to pulpit where my dad was seated, wagging his tail, obviously
pleased with himself for having sniffed out his master! The rest of us waited while
Buffer was led out the doors which were then promptly shut.
I have been in several services where someone has fallen ill, and
emergency personnel had to be called. I have been in church when there was
a fire alarm―luckily it was a planned one and the congregation dutifully
practiced “calmly moving towards the nearest exit.” I have heard about
services interrupted by untimely sickness on the part of the minister, or unruly
parishioners, or wandering wildlife. I officiated at a wedding once where the
date and place, and even the occasion of the wedding itself, had to be kept
secret from the groom’s mother for fear she would attempt to disrupt the
service. But to my knowledge I have never experienced worship that was
interrupted by a demon.

Jesus not only faced just that, but on his first full day on the job no less!
Here in the Capernaum synagogue, where our gospel reading takes us for
today, Jesus has just begun his public ministry. Only 12 verses ago he was
baptized by John. Nine verses ago he fasted and prayed for forty days in the
desert. Five verses ago he called his first disciples. Mark, who has been telling this
story, has been “speed narrating” us through the first chapter, wasting not a
word, lingering on nary a detail—until now. Now the narrative slows down. We’re
given a time—the Sabbath. We’re given a place—Capernaum. We’re given
extended dialogue and summary comments. Mark wants us to pay attention.
Here for the first time but not the last, Jesus’ power and authority will be
revealed.

Jesus goes to the synagogue for Sabbath prayers and readings and ends
up offering the sermon. This is not so extraordinary in and of itself. In first century
synagogues there were no ordained clergy. Services consisted of praises and
blessings, prayers and readings from the Law and the Prophets, most likely led by
the leaders of the synagogue, and a lesson given by any learned Jewish male.
Jesus may have been recognized as a visiting rabbi and invited to speak. The
extraordinary difference was in how he spoke. Mark tells us the congregation
was “astounded at his teaching, for he taught as one having authority, and not
as the scribes.” Scribes in this case refers to those who were studied interpreters
of Torah. They were intimately familiar with not only the written word itself, but
with the oral tradition attached to it, layers of interpretation that augmented the
text. The teaching of the Scribes would have involved citations of previous
teachers’ opinions, shoring up their moral and ethical lessons with tradition, and
precedent, and previous teachings.

Jesus didn’t teach that way. “You have heard it said… But I say to you…”
Jesus spoke like one who had direct knowledge, like a primary source, like one
with authority. The Greek word “authority” here, exousia, literally means “out of
one’s essence or being.” Jesus taught not only what he knew, but who he was.
Jesus was teacher, message and illustration all rolled into one. He preached
God’s compassion and he lived compassion. He taught God’s forgiveness and
he offered forgiveness. He proclaimed God’s in-breaking kingdom, the power of
God to transform and make new a tired and broken world, and he
demonstrated that power in word and deed. Take the Capernaum demoniac.
That day at the Sabbath service, while Jesus is already rocking the
congregation with his astonishing words, there suddenly appears “a man with
an unclean spirit.” The spirit confronts Jesus and challenges him. Jesus’ response
is swift, stern and simple: “Be silent and come out of him!” Unlike tales of other
Jewish or Greek exorcists of ancient times who used incantations, formulas and
magical manipulations to ply their trade, Jesus simply speaks and it is so. Word
and actions cohere. Proclamation and power are one and same. This is some
new teaching! This is a new kind of authority!

It is no coincidence that in the gospel story Mark sets out to write, he
places an exorcism at the top of the page. This is a side of Jesus’ ministry with
which we are less comfortable, less familiar, less experienced in. But for the
residents of Capernaum then and Christians down through the ages, the
message is clear: Jesus has come with power to liberate and set free all those
who are in bondage. And what bondage could possibly be more severe than
spiritual bondage, especially spiritual bondage rooted in fear? You can hear it in
the demoniac’s words, “What have you to do with us, Jesus of Nazareth? Have
you come to destroy us?” As human beings we have a powerful instinct for selfpreservation, which most of the time is a helpful thing. A healthy regard for risk and danger has allowed our species to survive. But self-preservation can
become an end in itself, can become distorted and dysfunctional―dare we say,
demonic?―locking us in manacles of fear and defensiveness. The unfamiliar, the
unknown, the “other” becomes our enemy and from that perverted perspective
even God’s love―meant to transform us and save us―appears to us as a threat.
“Jesus of Nazareth, have you come to destroy us?” Have you come to change
my life, enlarge my thinking, dismantle my pride and privilege? Jesus wants to
take the shackles off our hearts but there’s a part of us that loves those shackles
and fears their loss most dreadfully. My predilections, prejudices and defense
mechanisms have served me well, kept me safe. How dare you, God, want to
touch those? “Have you come to destroy us?”

And don’t think the fact that this encounter takes place in the synagogue
is just an idle detail. It’s only the first chapter, but Jesus―and we, reading ahead–
soon find out in chapter two that it is often those who wrap themselves in the
cloak of religious propriety who are the most un-free of all. It is so much easier to
talk about God than actually experience God. It is so much more convenient to
cite chapter and verse than to live in the freedom (and vulnerability) of God’s
amazing grace. It is so much more comfortable to define holy tradition and
sacred order according to what meets our needs than to ask what God needs
from us today. Jesus has come with power and authority to break open our
minds, our spirits and our religious sensibilities and bring something much more
wonderful to birth: he calls it the Kingdom of God, and according to his own
astonishing proclamation, it has come near. The so-called demons that infect
our lives and our churches might not contort our bodies or foam at our mouths,
but they wreak havoc with our hearts and minds―shutting us down rather than
opening us up, confusing change with destruction, renewal with threat,
difference with danger. These virulent fears and destructive defenses can
literally take possession of us and destroy us from the inside.
Haven’t we seen that in our national setting? Fear run amok. Anxieties
stirred up and set loose. False narratives empowered and weaponized to
protect a sense of slipping influence. We may not condone the actions of the
mobs, but we can understand the feelings. It is fearful to have our worldviews
questioned and our privileges challenged. It is fearful to be confronted with a
diverse and demanding world. It is fearful to feel small and weak and
diminished. And the temptation―the demonic temptation―is to turn around and
become fearsome ourselves, aggressively defend our presumed place in the
world by putting others back in theirs. We can see this kind of spiritual warfare
played out in arenas of every size: national, familial, interpersonal,
congregational. The spirits of fear, resentment, aggression, possessiveness
convulsing us into conflict with ourselves. We may not agree with theirs actions
or their politics, but we can understand their fear, for (if we’re honest) we have
felt it too. And if we’re not careful the same kind of reflexive resistance to
change and deforming defensiveness can take possession of us as well. Those
virulent demons threaten to undo us all.

But Jesus has only to say the word and demons flee. Have you ever
noticed that in the gospels? Demons–whether singular or legion–are simpering
weaklings before Jesus. Contrary to Hollywood horror genre, harassing spirits fold
immediately when confronted by the word of truth. All Jesus has to say is “Be
quiet, be gone” and they are. They mount no resistance.

Mark is clear. Chapter One. Top of the page. There is a new power in
town. It is the power to open our minds–astonish us even–and the power to
unshackle us from our most fearful oppressions. Sometimes those fear-based
behaviors are individual; sometimes they’re collective. But the man from
Nazareth, the Son of God, has come among us and we have a choice to live
under the thrall of fear or to live in the kingdom of God. Mark starts his story of
Jesus off with a bang to show us that even from the outset, Christ has come with
power and authority to set us free. A new kind of authority. The authority of love
to heal and transform us from the inside out.
Amen. 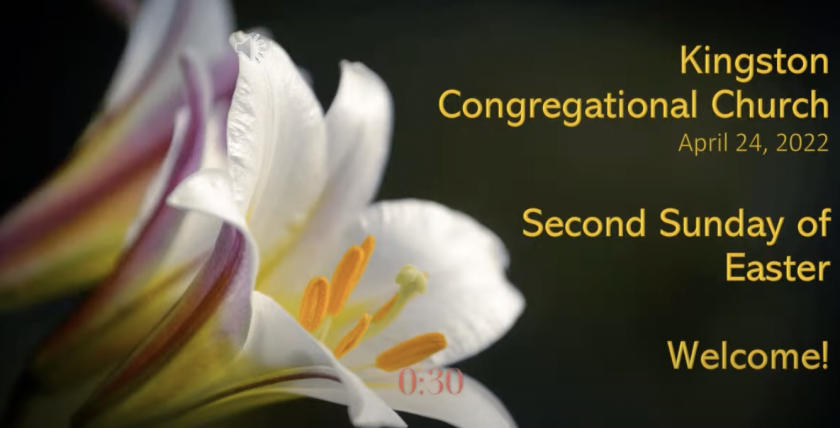 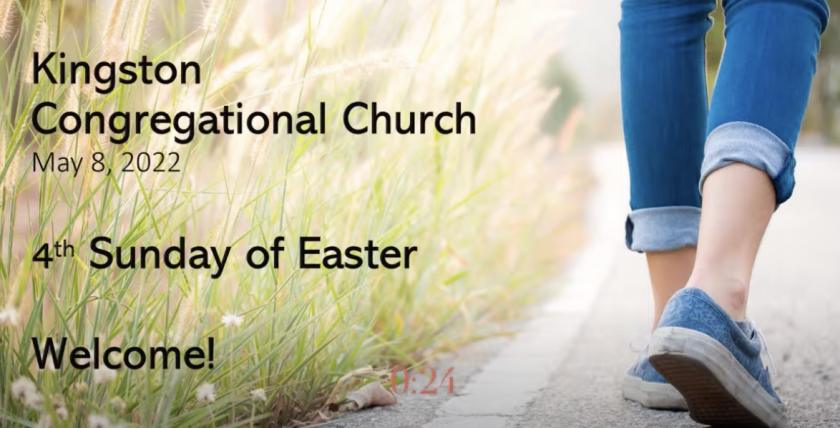 4th Sunday of Easter: Stand Up and Walk